Make an appointment for our

Use our online appointment booking to make an appointment for personal online study counselling with the MSA team.
Check our calendar for all available appointments.

Do you still have questions?

Make an appointment for our

Use our online appointment booking to make an appointment for personal online study counselling with the MSA team.
Check our calendar for all available appointments.

Do you still have questions?

With your requested information package, you will get competent course guidance by our MSA study advisers. They are able to recommend you universities that suit you best and they will answer all your questions about studying medicine abroad.

The City of Cluj-Napoca 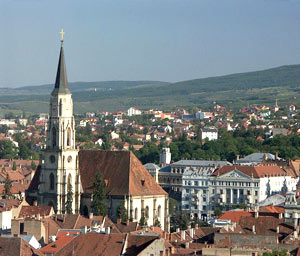 Cluj-Napoca, in the north-west of Romania, is situated in the middle of Transylvania. With an area of 179.5 square kilometres, it is one of the biggest cities in the country. In the capital of Cluj County there are more than 400,000 inhabitants. With more than ten practised faiths, Cluj-Napoca shows a great religious diversity. The majority of inhabitants belong to the Orthodox faith. 23 percent of the citizens of Cluj are of Hungarian origin, which makes the city the focal point for Hungarians living in Romania, who are otherwise a minority. Also people of German origin live here; they amount to approx. 2 percent of the population. Apart from the official national Romanian language, one of the Romanic languages, it is also possible to hear in Cluj the languages of the minorities. The city on the shores of the river Somesul Mic is located in an attractive landscape, full of mountains, forests and abundant water. Apart from big lakes and river rapids there are also some underground waters. The moderate-continental climate has blessed Cluj-Napoca with warm summers and cold winters.

Cluj-Napoca can look back on 2,000 years in history, as a former centre of Roman culture. However, the city was originally a Dacian settlement. In the year 106 a.D. it became a Roman colony that would soon be declared the capital of Dacia Porolisensis. It was at this point that the romanisation of language and culture began. During the following 500 years, the city would be ruled by Goths, Huns, Bulgarians, Avars, Pechenegs, Komans, and Tatars.

After the invasion of the Tatars in 1241, the Saxons settled in the village of the Roman fortification Clausenburg. Both the German and Hungarian names for this fortification come from the Latin word “clausa”, which means closed space. In 1317, Clausenburg was granted municipal rights as one of the seven Saxon city foundations. In the Middle Ages, it developed and became an important city with 5,000 inhabitants.

Also in the following centuries, more and more foreigners settled in Romania, and so did the Hungarians in the 16th century. In the 17th century, Austria expanded their claims to land to Hungary and Transylvania. During the Austrian rule, Cluj-Napoca became headquarters of the government; a fortification was built on the left river shore. In the end, the high taxes imposed by the Austrians caused emancipation movements which culminated in the revolution of 1864. Three years later, Cluj-Napoca became a part of the Kingdom of Hungary under the name Koloszvar.

The participation in the First World War brought much suffering to the city. Since 1918, Cluj-Napoca has been Romanian. In the years 1940-1946, this Cologne’s partner town came back under Hungarian territory. In 1944, the city changed name again, and it became Cluj-Napoca. The addition of the word Napoca reminds of the Dacian origins of the city.

Culture and Places of Interest

Cluj-Napoca is not only the home of musical talents, but also to literary and artistic creators, as is evidenced by the great number of festivals and competitions. The Mozart Festival and the Festival in memory of the poet and philosopher Lucian Blaga, where poems are read, have become an institution.

The Romanian city is, like Cologne, a mecca for people interested in museums. Apart from the art and literature museum, we can highlight the Muzeul National de Istorie a Transilvaniei, which presents the history of Transylvania. Cologne and Cluj-Napoca have a third feature in common, apart from art and museums. In both cities you can feel the typical atmosphere of a student city.

The artistic side of the city is also omnipresent. This is particularly expressed in the architecture. All European building styles from the Middle Ages and the Renaissance are represented here. The palaces Banffy, from the 18th century, and Teleki, built in neoclassical style, are well worth seeing.

A fourth common point are the churches. The amount of churches is a symbol of Cluj-Napoca. They are worth visiting especially for their art treasures, for example, icons built in gold and silver. The Church of St. Michael, from the 14th century,  is particularly worth mentioning, the biggest temple of its king in Transylvania. The Gothic style building -the Cologne Cathedral is also built in a Gothic style- was impossible to finish during the 200-hundred-year construction works. The church has only one tower, instead of two.

Those who wish to follow the steps of Count Dracula should pay a visit to castle Bran near Brașov. This estate is said to be the residence of Prince Vlad Tepes, who served as a source of inspiration for the novel character.

Plane: Cluj-Napoca has its own airport. You can fly from many European cities. There are flights for less than 60 euros.

From the airport, the bus line number 8, which has a stop directly on the sidewalk of the airport, goes directly into the old town. However, tickets are not sold at the airport or in the bus, but can be picked at the Bilete-Cot for RON 3 (Value: January 2010). One is valid for two trips.

With licensed, official taxis, the trip from the airport to the city centre costs RON 20 to 25 (day rate), at night approx. 10% more.  Prices over these rates should not be accepted. Official taxis are recognised by their yellow labels with number plates, as well as by the price sign on the door on the side of the driver or the front-seat passenger. The fares during the day are RON 1.79 as a minimum fare, as well as 1.79 per kilometre or 17.90 per hour. During the night (22 to 6 o’clock), the fare increases to RON 1.99 or 19.99 . If you pay attention to whether the taxi driver activates the taximeter (the display is changed by LIBER to the current price), you will arrive safely and cheaply to your destination. Transportation offers, for example from Wizzair, should not be taken into account due to the excessive price of EUR 10 and more.

Train: Cluj-Napoca is crossed by diverse train lines of the Romanian railway company CFR. Among others, the stretches to Brasov (through Medias) and Oradea are serviced several times a day. There are also direct connections to Bucharest, Iasi, Timisoara and to the north of Romania in direction Satu Mare. The price of the trains depends on the train class. Particularly, trips with the PERSONAL-trains require some more time and patience, but are attractive from the price point of view (RON 0.1 /km). If you travel by train, you should count on some considerable delays. The average velocity, an estimation based on experience, is approx. 40-45 km/h. You will find more information on www.infofer.ro Website of the Romanian Railway Company CFR.

Bus: From Budapest (bus station Nepliget and from the airport), there are regular minibuses and bigger buses (Orangeways and others) which stop in Cluj-Napoca. The trip costs 20 euros and lasts some 7 hours.

Car: The old town of Cluj-Napoca is very confusing at first sight, since it has a strange system of one-direction roads. Particularly, trips between Piata Unirii and Pata Stefan Cel Mare are rather confusing for visitors, as the signs are not necessarily enough or clear. In total, the traffic can become a little adventure in the mornings and in the evenings due to the rush-hours.

For visitors, we would recommend leaving the car where you are staying and take a taxi for short stretches.

This website uses cookies to enhance your experience as you navigate through it. Of these cookies, those categorized as necessary are stored on your browser, as they are essential for the functionality of the basic functions of the website. We also use third-party cookies to help us analyze and understand how you use this website. These cookies are only stored in your browser with your consent. You also have the option of rejecting these cookies. However, if you reject some of these cookies, this may affect your browsing behavior.
Required Always Enabled
Necessary cookies are necessary for the proper functioning of the website. This category only includes cookies that guarantee basic functionality and security features of the website. These cookies do not store any personal information.
Performance
Performance cookies are used to understand and analyze the site's key performance indicators, which helps to provide a better user experience for visitors.
Non Necessary
Any cookies that may not be particularly necessary for the website to function and are used specifically to collect user personal data via analytics, ads, other embedded contents are termed as non-necessary cookies. It is mandatory to procure user consent prior to running these cookies on your website.
Save & Accept